This site uses cookies - see our privacy policy. Ads & links in bold may give us a small payment from the seller, at no cost to the buyer. However, this never affects our views - if we like it, we recommend it.

Cheap wedding ideas - 10 tips for getting married on a budget 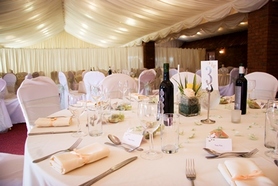 Fear not, here are 10 shortcuts and suggestions for planning a cheap wedding on a budget. 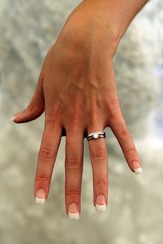 Engagement rings don't need to cost £1000
You might have already bought the engagement ring, but if you’re shopping for a diamond ring after proposing then this is an area where you can save big money.

There are ‘traditions’ around spending a month or two’s salary which were cooked up by diamond ring sellers which you are welcome to ignore completely.

If you’re not too superstitious, consider buying second hand jewellery. Diamond rings depreciate faster than sports cars, which is bad news for spurned proposers but good news for bargain hunters. A £1000 diamond ring will probably only fetch about £200-£300 on eBay, even if it’s only been worn for a few days or weeks. Rings from well-known jewellers (H Samuel, Goldsmiths etc.) get slightly higher prices if they have grading certificates and receipts, and offer extra reassurances that you are getting what you paid for.

Alternatively, get a synthetic diamond. You can pick up a ring which looks like it would as much as a deposit on your first house for less than £100.

Another option is an alternative gemstone such as a ruby or sapphire. Decent looking engagement rings cost as little as £100.
​
Finally, you could buy a new diamond engagement ring from one of the cheapest online sellers. Amazon prices are hard to beat (we've done price comparisons for 0.25, 1 carat and 2 carat rings), or there are several big online jewellers which offer prices which are considerably lower than high street jewellers (Diamonds Factory, Diamond Heaven etc).

Platinum and 18 carat gold wedding bands can easily cost hundreds of pounds (up to £1000 for a heavyweight platinum ring). The markup varies greatly depending on whether you buy from a trendy jeweller or a lesser known online retailer, or from an eBay seller (see our guide to cheap wedding band retailers).

It’s an area where you can certainly save on the cost of your wedding, although some people decide they would rather spend more on the rings as they will (hopefully) long outlast the day itself.

If you want a mid-value wedding band, I’d consider 9 carat gold, although you should really get a gold ring which matches your engagement ring setting or there’s a chance the harder metal will very gradually wear away the softer metal.

If you are on a tight budget, I would consider cobalt, tungsten, silver or titanium wedding rings. If you shop around you can pick up a wedding band made from one of these materials for somewhere between £10 and £100.

What’s interesting is that spending more doesn’t necessarily get you a ring which is more practical or longer lasting. White gold tarnishes over time, whilst tungsten won’t tarnish in the same way and costs a fraction of the price.
​
We’ve got a full guide to where to buy cheap wedding bands.

My feeling is that it’s becoming increasingly acceptable to have a gift list which varies from the traditional list of toasters and kettles.

You might consider asking guests to put money towards your honeymoon, or even towards the cost of the wedding. Websites such as HoneyFund will sort this for you.

Alternatively, you might consider Amazon for your wedding gift list. They sometimes do a deal where you get £50 free if you spend £250 on a wedding gift list, although I couldn’t see any signs of it when I searched in November 2016.

We used Amazon for our wedding and it generally worked well. Prices were much better than some competitors, the range was bigger and delivery is generally free.

The only issue we had was that prices go up and down on Amazon, so you’ll add something which you think is a bargain but the price could be higher once someone buys it.

Another issue was that if a third party seller comes up cheapest then it may be sent by them instead, if the buyer doesn’t understand how Amazon works. Again, that’s not a big problem most of the time, as third party sellers should be selling the same things and have to oblige by the same returns policies.
​
Finally, your gifts arrive gradually rather than all in one go. That’s not necessarily a problem, but some people prefer the practicality of the shop holding all your products and a great big lorry arriving.

The absolute cheapest way of managing your wedding invitations is to go digital. That might not be any good for your Aunt Maude, but most guests under the age of 80 won’t conclude that you are being cheap, since the digital option also allows you to keep track of who has replied. It also saves guests a stamp if they plan to send a wedding acceptance card back. Honestly, what a faff…

Wedivite and eVite are popular options, but there are loads out there.

Most have some free designs and some which you pay for.

Inevitably there will be a handful of guests who won’t use email, so you can either cut all ties with them or if that seems a bit harsh, just buy a small pack of invitations for about £5.

​Money Saving Expert offers the excellent tip to plan a church wedding to coincide with a major date in the church calendar (Christmas, Easter etc) when many will already have flowers on display. Of course, that might not be practical and some churches decorate with flowers more than others, but you might be lucky.

If you’ve paid for flowers at the church/ceremony venue, lots of people arrange for them to be moved to the reception by a willing aunt, so you are at least getting double the value.

There are companies which hire out silk flowers in the UK though it seems to be a limited market. Try The Finishing Touch Company or Unreal Flowers (Oxfordshire, Berkshire, Buckinghamshire only).

6. Wedding dresses on a budget

There's a staggeringly large market in cheap new wedding dresses, some of which are imported from abroad and some based in the UK.

As you can imagine, it takes a bit of work sorting the classy wedding dresses from the Halloween bride outfits...

I'd start with Amazon wedding dresses, as you can garner a lot of information from the reviews. There are hundreds of wedding dresses under £100, many of which are sold by third parties in Amazon's huge 'Marketplace'.

eBay also has a vast range, though I found it a bit trickier to find reviews of the dresses (though you can see reviews of the sellers which is just as important).

Another obvious way to save big time on wedding dresses is to buy secondhand from: ​
Hiring a wedding dress is also an option. However, it's certainly not as cheap as hiring a car or popping to Blockbuster to pick up the latest Chevy Chase film on VHS.

Personally I would be inclined to buy second hand and then sell the dress afterwards. You could see it as hiring, and you'll get most of what you paid back, minus sellers fees and cleaning costs.

Hmm, this is a tricky one. Most cheap wedding guides online just suggest things you will have thought of already, such as asking a friend who also happens to be a professional photographer. Nevermind that they usually photograph cream cakes.

My view is that you can definitely tell the difference between professional and amateur photography. There are lots of inexperienced photographers with a nice camera who will have a go at a cheap price, but it is a bit pot luck whether or not they are any good. Try to work out from their website how many weddings they do, and whether photography is a job or a hobby. Hobbyists will be cheaper, but it's a gamble.

Ideally find a photographer who displays a large gallery from a wedding rather than two photos, since a monkey with a decent camera will get a couple of good shots out of several thousand.
​
Anyway, a few reasonable options:

Most guides to cheap weddings that I’ve read online just point out the blindingly obvious, such as suggesting that you hold the wedding in your own house if you happen to live in a manor. Surely you’d have thought of that already if it was an option?

For most of us, squeezing a hundred guests into our lounge would be a little more ‘intimate’ than we might like.
Others suggest turning up at a country park with 200 guests and a couple of disposable barbecues. I can only assume that the authors haven’t experienced an unpredictable British summer.

Hiring a village hall is a little more practical in my view. Lots of them have been much improved in recent years from the avocado green crockery you might expect.

After 5 minutes on Google I found several village halls near me which were modern and affordable, with commercial kitchens and parking. Some were also attached to playgrounds and parks. Prices were about £100 - £250 for all day on a Saturday, or cheaper if you went for something midweek. Some charge by the hour (fnarrr) whilst others do a day rate or weekend rate.

Of course, a village hall on its own is pretty bare, so you would need to rely on several willing friends and relatives who could do some decorating and tidying away afterwards. A mile of white fairy lights is a relatively cost effective option.

Licensed village halls can sell alcohol and play live music.
​​
A less labour intensive option for venues is to find a cheap hotel with a wedding package. At the time of writing you could get an Old English Inns wedding package for 50 people from £999.

Cancelled Weddings is an interesting concept, with pre-booked weddings up for grabs at a reduced price. I don’t think that would have worked for us, unless you suddenly want to relocate your guests etc, but it might work for some who are more flexible.

One option we looked at was ordering a buffet from M&S or Sainsburys, which generally works out as much cheaper than paying a catering company. It does require 2 or 3 reliable volunteers (generally your Mum’s friends…) to collect the food and lay it out, but the quality is good in my experience.

In terms of music, I’ve come to the conclusion that most DJs nowadays just hit play on a playlist rather than the days where they would cart around a boot load of CDs and vinyls of Showaddywaddy

If you can get a half decent set of speakers, or plug in to the venue’s speakers then it is much more feasible nowadays to plug in your own mixtape on an iPhone or generic fruit based device. Give the job to a technically minded friend (definitely not your mum’s friends for this job) who will know the difference between a jack plug and a headphone socket to avoid an awkward silence.

Now, this is a tricky one. Will your guests consider you a cheapskate or an environmentally aware citizen for sending them a digital thankyou card? If it's the latter then your options include Punchbowl or 123Greetings.

One frugal alternative is to send postcards from your honeymoon which double up as thankyou cards. It'll obviously work out as most cost effective if your honeymoon is in the UK. Postcards are generally cheaper than thankyou cards, and you'll get away with only writing a few words to Great Aunt Maude.
If this guide has helped you, please share it!